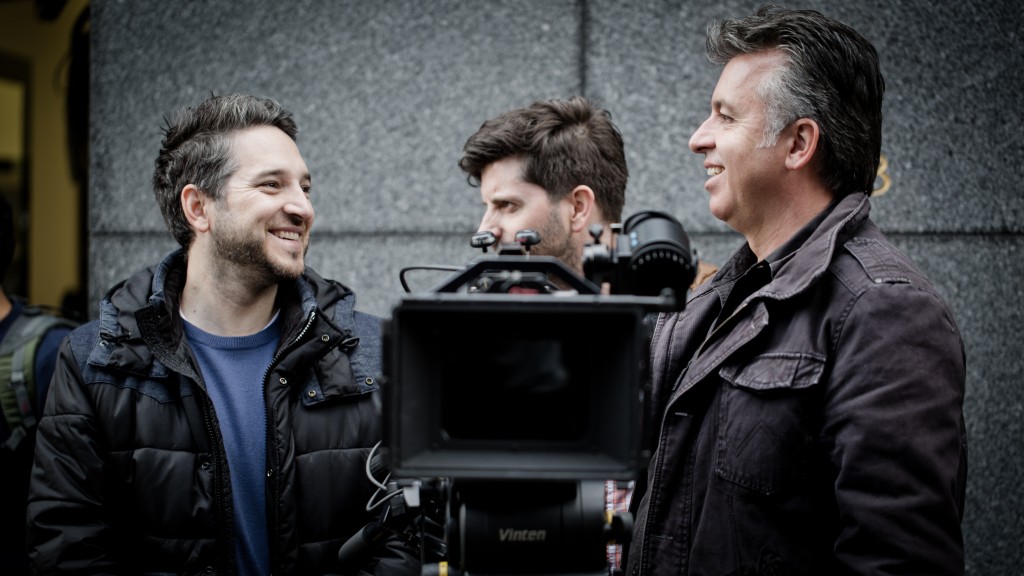 There’s been an empty blog sitting on our website for some time now.

As the owner, I’ve had plenty of thoughts and ideas to contribute, but I’ve never committed to putting my thoughts out there for everyone to read.

The 10 year anniversary of Bravada Films certainly snuck up on me and it seems like the ideal time to reflect on what we’ve achieved as a company and think about what the future may hold.

Here’s a little retrospective on my time in the advertising and production industry:

I received a fantastic initiation at Channel 9 in Sydney & Melbourne at TVC Productions/9mm under Cameron Jurd. Tight budgets, hard deadlines and at a young age I was given a lot of responsibility and I loved it. This was when TV advertising was at its peak and there was a great sense of freedom and a thriving social scene. It was a great time and I have so many memories I’ll cherish and a lot I can’t repeat in this forum!

But being young and ambitious drove me to start my own production company. It was and still is much harder than I ever imagined, but you learn a lot about who you are and it’s certainly been one of the most rewarding experiences of my life. First and foremost I need to thank the past, present and future clients of Bravada Films, we can’t do it without you!

Peter Jackson menswear. We worked with ‘the’ Peter Jackson (who has since sadly passed away), on a campaign with the Western Bulldogs featuring a young Adam Cooney. Shot on 16mm film at Etihad Stadium (Telstra Dome at the time), the budget was small, but it was a great feeling to get this first win and feel like we were a real company.

You can view all of our work on the homepage (www.bravadafilms.com.au) but here’s a snapshot of some memorable moments and experiences from over the years: 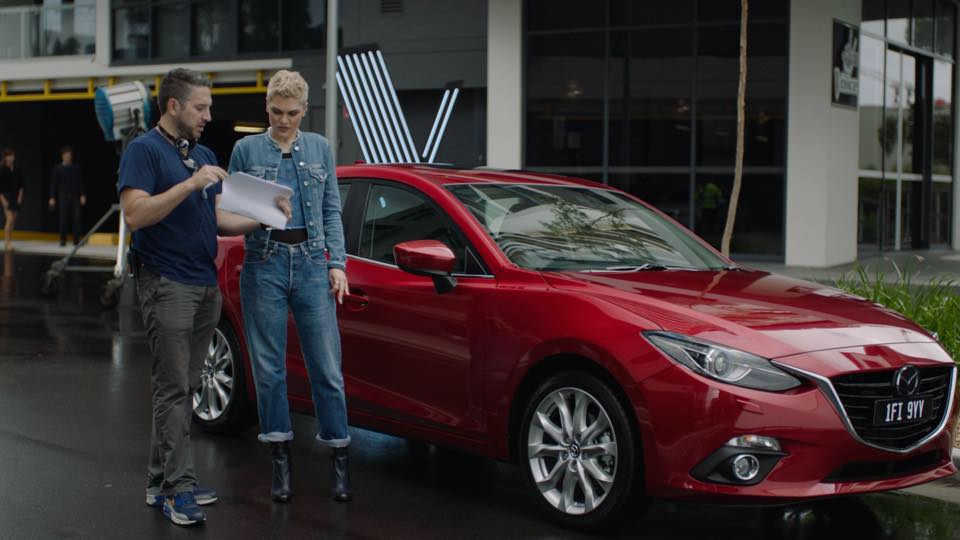 We’ve done a lot of car commercials over the years and I get excited each and every time. I mean, how often do you get to work with Jesse J driving a Mazda3 singing an iconic 80’s power ballad?? 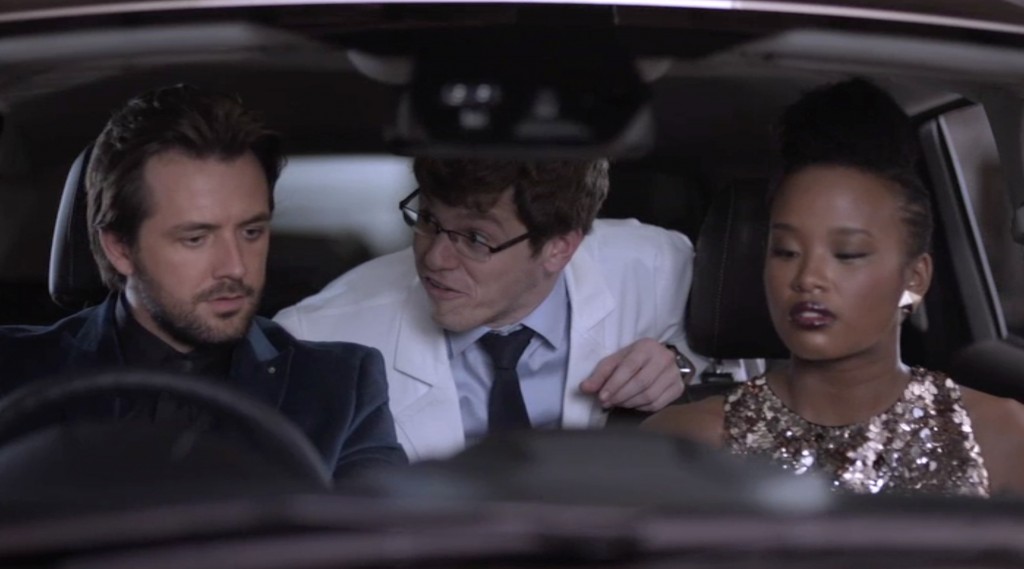 Or as a massive movie buff getting to do an homage to James Bond and those awesome gadget-briefing scenes with Q for Ford? Hello Barbara Broccoli, I’m available! 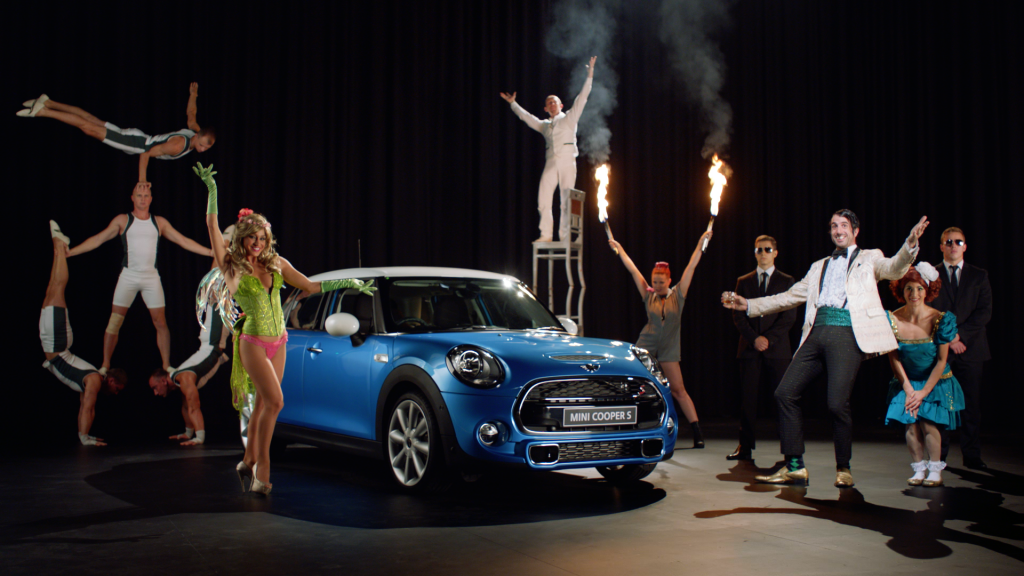 It was also a lot of fun when we were given the chance to create our own ‘Mini’ stage show with some sexy burlesque performers, acrobats and potty mouth comedians! 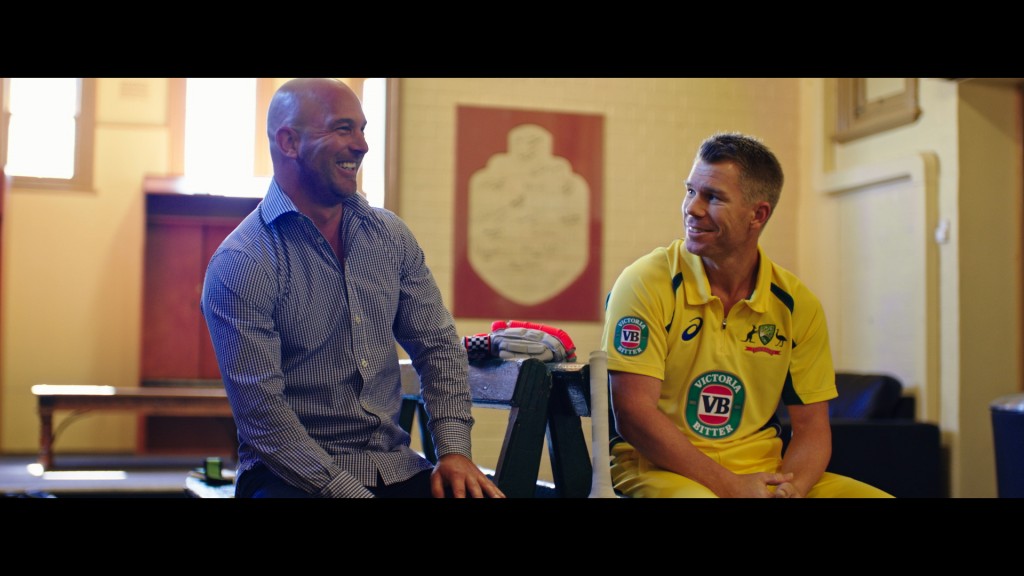 The VB Name In The Game promotion featured Aussie cricketers David Warner, Shane Watson, George Bailey and Mitch Starc, giving thanks to the people who had helped them get to where they are today. There were a few tears on set watching these touching moments.

Airports, excess baggage and everyone crammed in a van traveling to small towns and remote locations for days on end, doesn’t exactly sound like fun, but the Holden Junior State of Origin was truly a great experience. 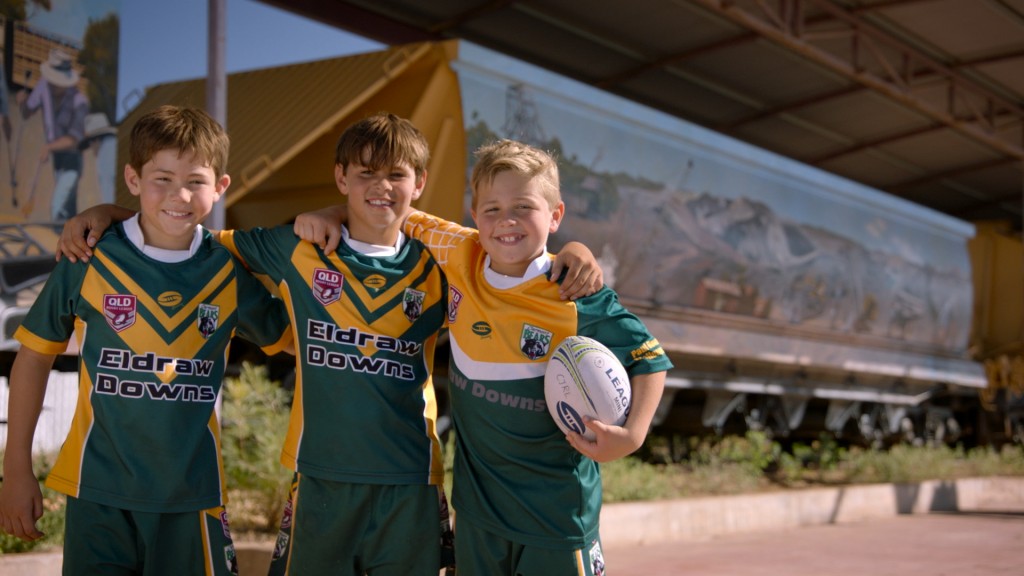 We created a content series featuring the Dungog Warriors and Clermont Bears U9’s rugby league teams on their journey to Sydney to play at the opening State of Origin. The kids were fantastic, so raw and honest and it was great seeing them meet their heroes and play at ANZ stadium in front of a massive crowd. 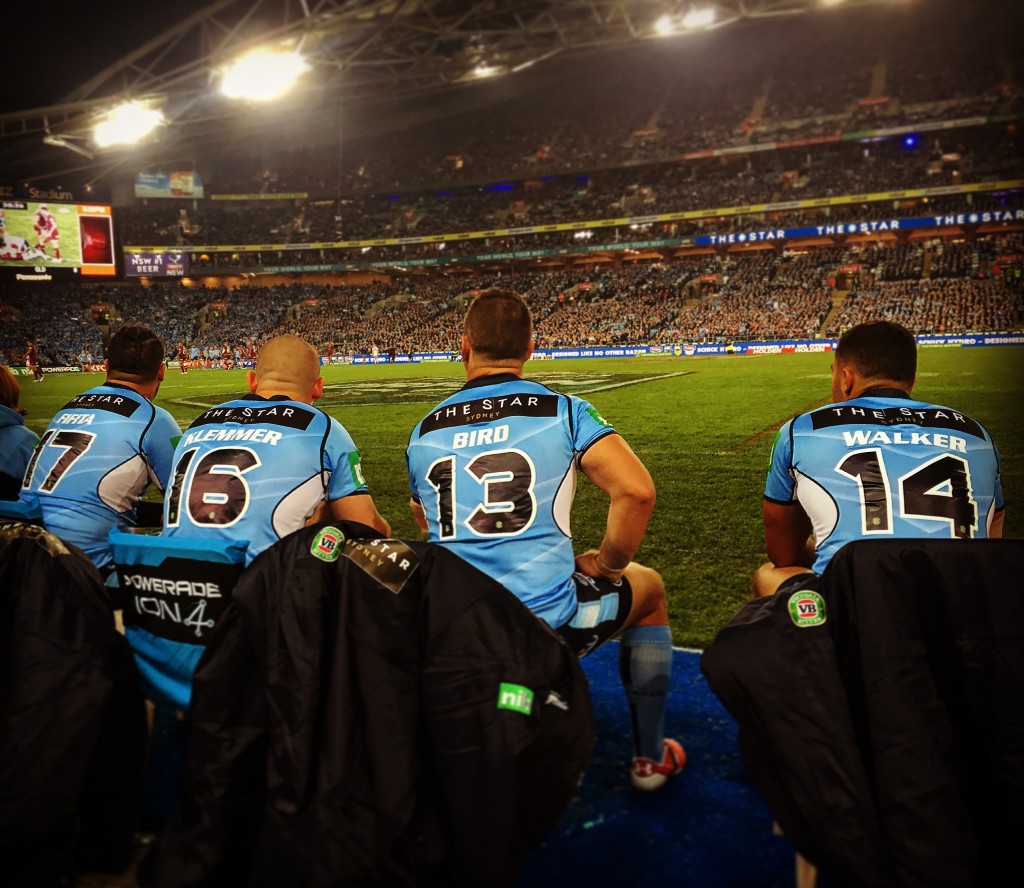 As a rugby league fan, this was also a great experience for me. Standing on field behind the NSW bench during the national anthem was a surreal moment and one I’ll remember forever.

We’ve created various other sports related campaigns including the Cronulla Sharks membership and we’ll certainly take some of the credit for the success they’ve experience this year!

Another highlight was when we had the Carolina Panthers NFL superstar quarterback Cam Newton visit Melbourne as part of the ‘Footballers‘ concept for Gatorade. Under the watchful eye of Kansas City agency VML and New York based production company Decon; Bravada Films produced the Australian shoot component and facilitated the location scouting and all local production crew. 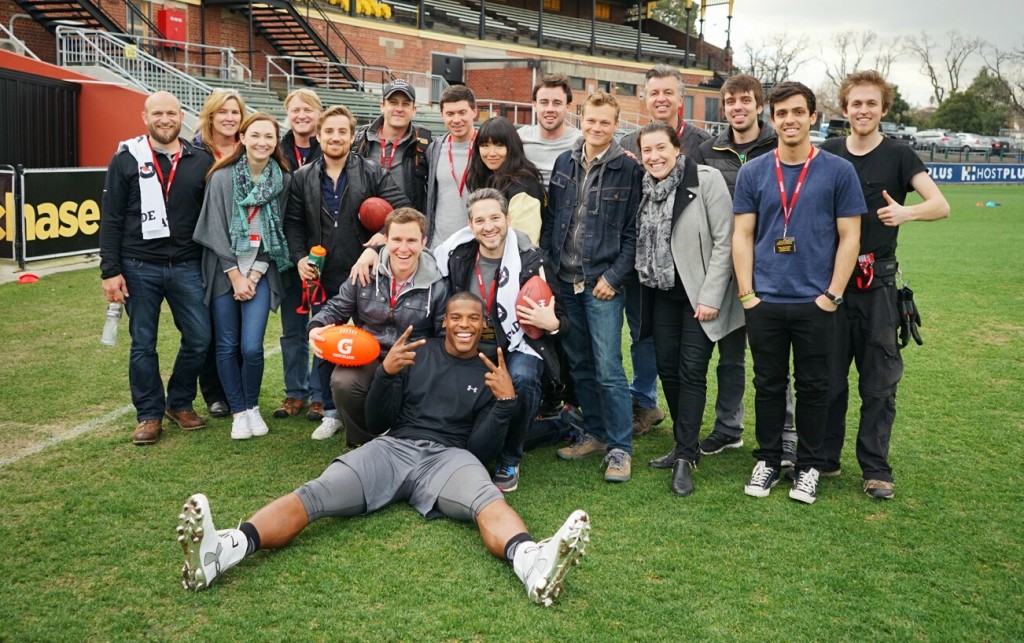 *Various works were a co-production with our great partners at 9mm.

We are fortunate to work with a couple of fantastic charities, Save The Children and the Brotherhood of St Laurence (BSL) who do such an important job in the community and make the lives of others so much better.

For a particular BSL 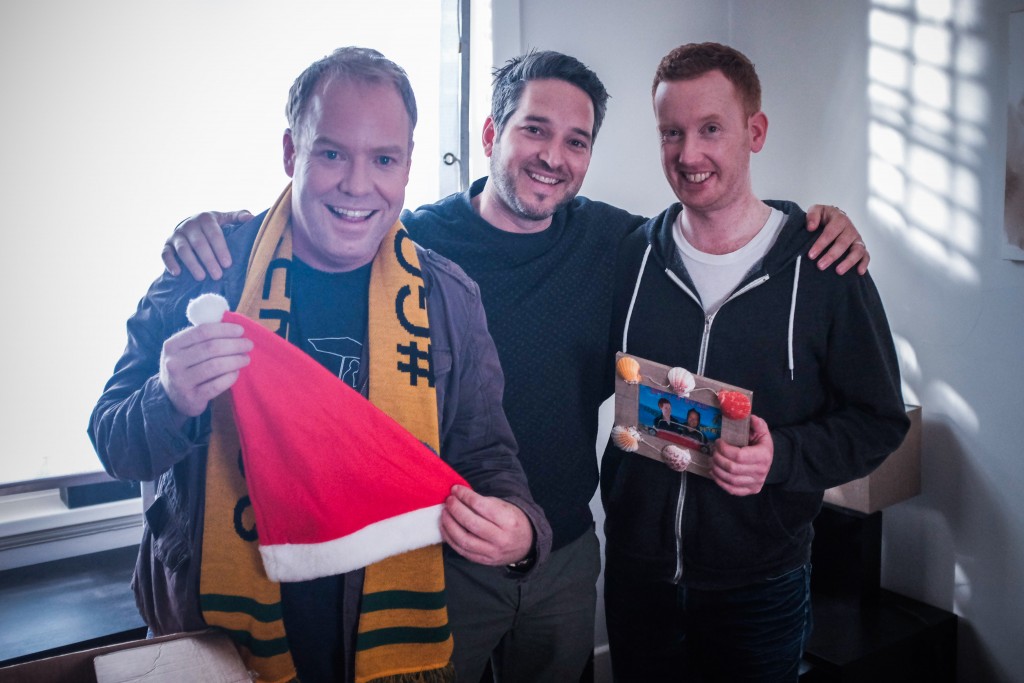 campaign we were updating their famous John Clarke donation ads with two of Australia’s best comedians, Peter Helliar and Luke McGregor. It was such a great collaborative experience, bouncing around ideas in a writing session and getting to direct them on set. This was certainly a day that didn’t feel like work at all!

A few years ago we made a short musical film about love, in a photocopy store, called A4 to A3.

I’d done some short student films during my stint at the NYFA (New York Film Academy), but this was my first genuine short and something that took me right out of my comfort zone.

Written by the #1 New York Times bestselling writer Tom Taylor (DC Comics, Marvel, Gestalt Publishing, Dark Horse Comics/Lucasfilm and the o-creator/EP/Head Writer of The Deep) we assembled a great creative team, cast and crew to produce something we are all proud of.

I attended its world premiere in America with star and co-producer Joe Main at the prestigious Newport Beach Film Festival, which has such a strong community feel and support for filmmakers. Seeing your work screened in front of an audience was such a thrill and I think this is why we all end up putting so much time and money into our creative work!

We’ve worked with some exceptionally talented people including celebrities, athletes, comedians and international superstars such as: 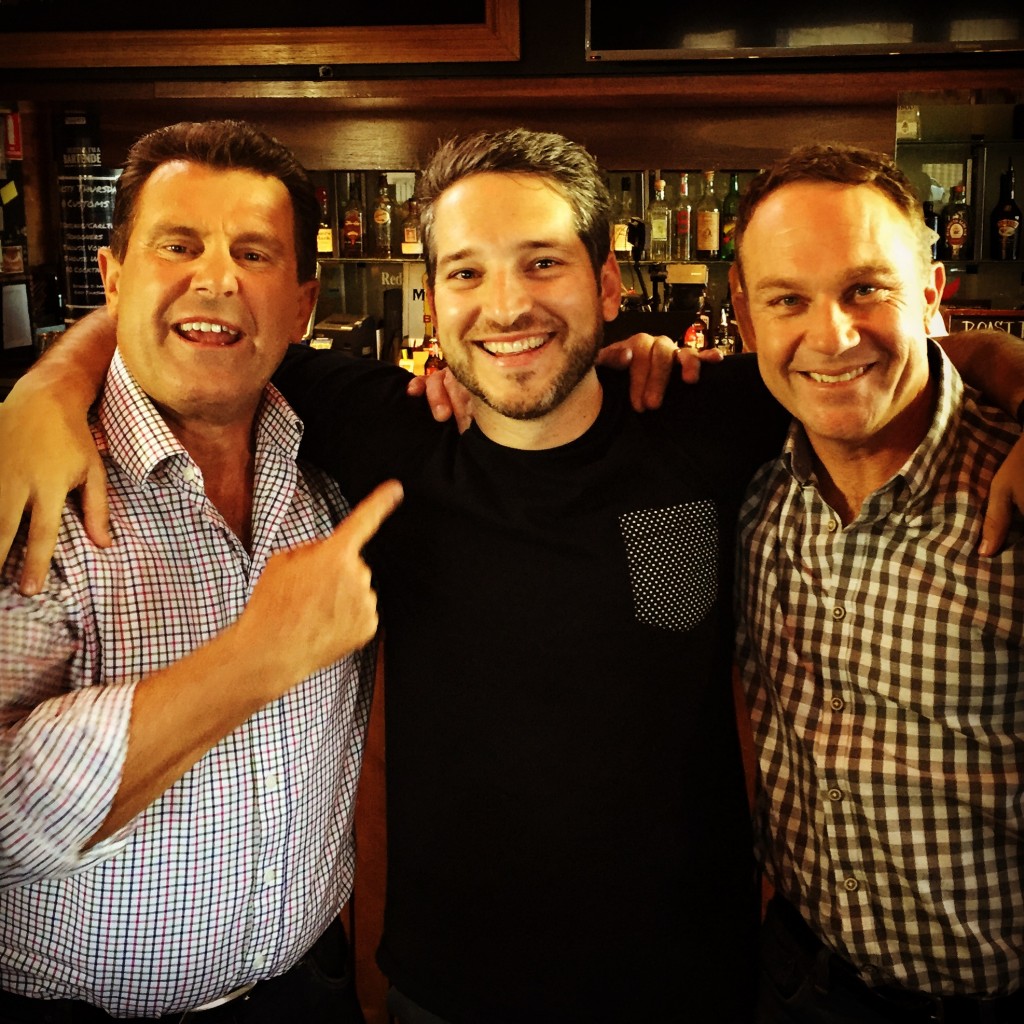 Now, this isn’t just a shameless excuse for name-dropping (ok, maybe just a little…) but the point is that there is a definite skill in using ‘real people’ to get a natural performance. You are often up against strong personalities with minders or agents that you also need to navigate and generally speaking you have limited time available with them. But they are all professionals for a reason, some make your job very easy and I’ve never walked away from a shoot unsatisfied…at least, not during my time at Bravada Films.

I will tell a short story about a big name Hollywood actor who was in Australia promoting a movie. After waiting a long time for our allocated 15 minutes, he walked in and exclaimed ‘I’m so wasted!’ (this was about 11am) before putting his Starbucks iced coffee on the table (I remember all of the minor details) and proceeding to fumble and mumble his way through his lines. In the final edit we ended up using some finger pointing and the audience was none the wiser. This was pre selfies, but I was able to walk away with a signed CD (remember those?) of the movie soundtrack!

We’ve also worked with some young talented actors and actresses and it’s a great feeling when you see someone you cast in a commercial break out into film or TV and you can claim some of the credit. Hopefully they remember us when they make it big!

You live and die by the people you collaborate with and thankfully we’ve built up a great team of creative producers, editors, animators, motion graphic designers and stellar freelance production crew who we are also happy to call our friends. 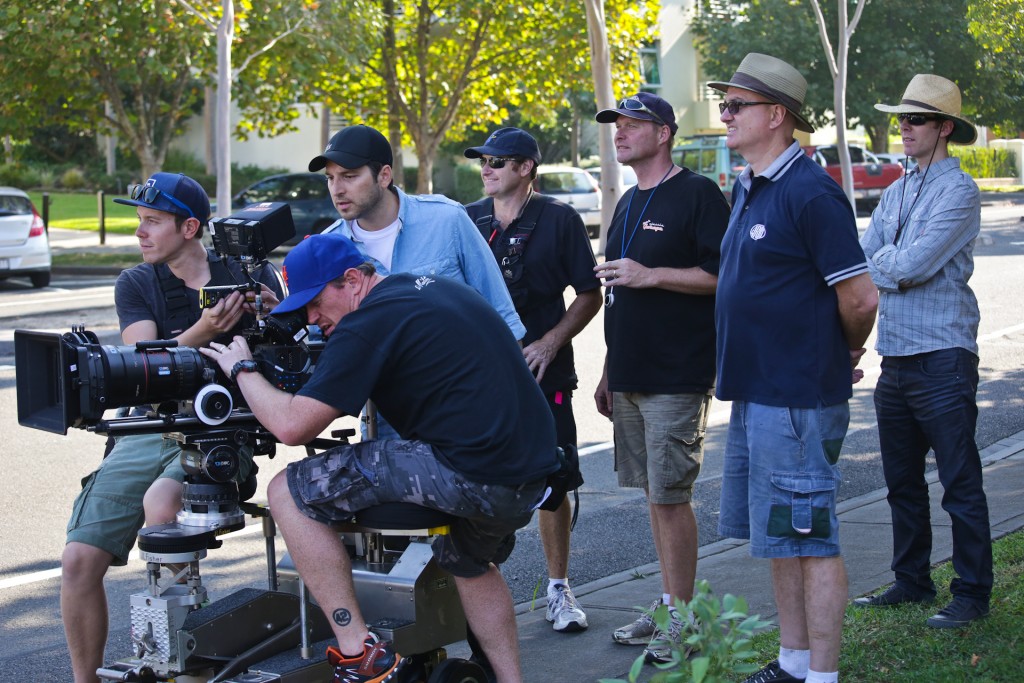 bviously their talent and skill is vital, but so is their personality and for regular contributors to Bravada Films, we tend to work with people that are not only great at what they do, but they can work quickly when needed (which is nearly all the time!) and importantly, that we can share a laugh with, even in the most dire of situations! 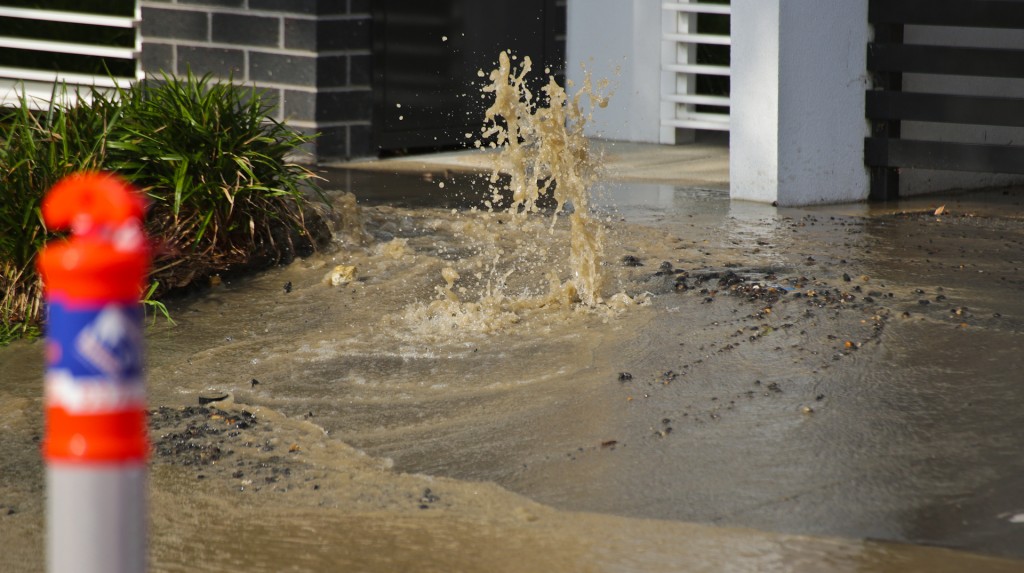 A perfect example of this is from a particular car commercial.

We had an underground water-pipe burst, shooting water into the air and causing the road to bubble underneath us. After getting over the initial panic, we quickly found an alternate shoot location (still within our council approved area) and shot scenes without dialogue while the council simultaneously fixed the leaking pipe. It really was one of those laugh or you’ll cry moments.

The beer never tasted better than at the end of that day! 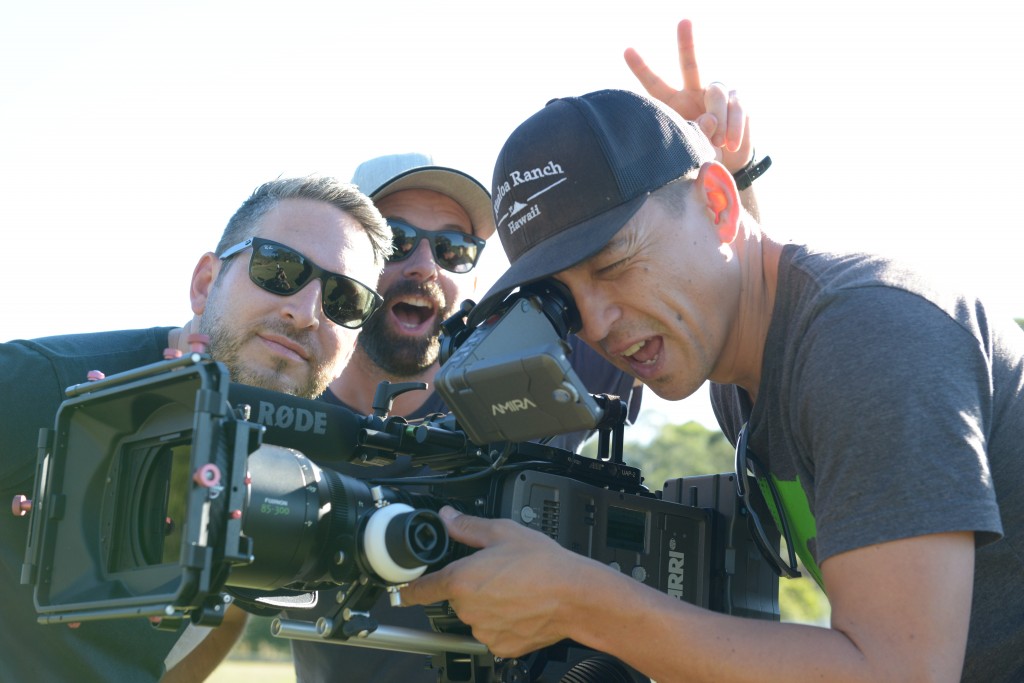 All in all I’m excited for what the future holds. I’m still as hungry and passionate about creating stories as ever and quality content has never been more important than in today’s landscape.

It really is a privilege to be able to come to work everyday and do what you love!